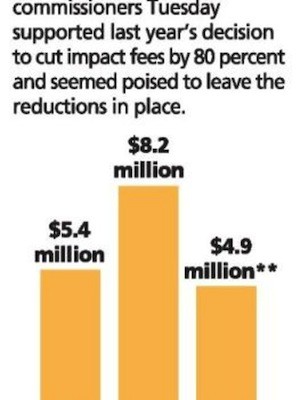 Lee County’s 80 percent discount on impact fees seemed poised to stay in place for another year despite objections from one official.

Commissioners on Tuesday met to go over building permits, new construction and other economic indicators about 11 months after reducing the surcharges on new construction for a two-year period.

Lee’s coffers would have raked in more than $15.3 million for new roads, schools and parks — assuming the same amount of new homes and businesses went up and commissioners didn’t slash the fees. Instead, Lee collected some $13 million less, reporting impact fee revenues of a little more than $3 million (excluding fire and Emergency Medical Services fees, which remain at their full rate).

But Commissioner Cecil Pendergrass said the decision to reduce impact fees — from about $12,500 to $3,000 on new single-family homes — prompted development that wouldn’t have otherwise occurred.

Commissioner Frank Mann, however, argued Lee’s rebounding construction industry reflected regional and national trends. For example, Bonita Springs’ home-building industry has rebounded from the recession faster than the rest of Lee County without lowering its impact fees. In January, builders pulled 45 permits for single-family homes compared to just 13 two years earlier before the recovery had started in earnest.

The funding for those projects, Mann said, will now entail dipping into Lee’s general fund. The property tax-supported source would have operated at a deficit this year, but commissioners closed that operating shortfall by taking $26 million that was historically collected to buy property through Conservation 20/20.

“I think as a matter of policy we are going in the wrong direction,” Mann said. “We are penalizing ourselves, and it’s forcing us to steal from environmental money.”

The commission did not discuss how it will cover the $14.6 million shortfall for public projects. Assistant County Manager Pete Winton said shortfall could be lower once new projections are completed.

Tuesday’s presentation included figures showing unemployment in Lee, Collier and Charlotte counties is on a downward trend. While Lee’s and Collier’s jobless rates are comparable, the rebound here has been stronger than in the southern county, which kept the majority of its impact fees. To the north, Charlotte suspended impact fees for parks and emergency services between 2012 and 2014. Its unemployment remains higher than both counties.

People can only buy homes if they have jobs, Commissioner Larry Kiker said. The preliminary figures, he said, seem to support that reducing impact fees gave Lee an economic boost. He later cautioned the discount hasn’t been in place long enough for proper analysis.

“I think this thing, at the end of the day, does support the investment we’re making” Kiker said.

Mann mocked the notion Lee’s decision to reduce impact fees could be connected to employment trends or construction industry growth. If that were the case, he said, Lee should have reduced them five years ago to stop a nationwide economic slump.

Pointing out homes in Collier are pricier on average, Commissioner John Manning said it’s unfair to compare Lee against other counties or areas.

“I would suggest to you, that over the years I’ve been in Lee County, the marketplace in Lee, Collier and Charlotte are totally different,” Manning said.

Brad Cornell, a policy associate of Audubon Florida, told commissioners earlier that Lee needs to lower impact fees in urban areas to encourage redevelopment, while raising fees in far-reaching parts of Lee as a means to slow suburban sprawl.

Cornell made his remarks during a morning commission meeting, when impact fees were not on the agenda. Members of the public were prohibited from speaking at the afternoon session on the fees. Lee County Attorney Richard Wesch said state law lets commissioners assemble without hearing from the public, because they were not making a decision or issuing direction.

“I don’t believe you can create jobs by raising fees on job creators,” Hamman said.